Stephen Doggett, former Head of Comms at Clyde & Co and a well known figure in the City legal market, passed away from a rare form of cancer last weekend.

For such a thing to happen to anyone would be tragedy. For it to fall upon such a thoroughly decent and kind man, at the age of 40, with a wife and three young children is beyond cruel. 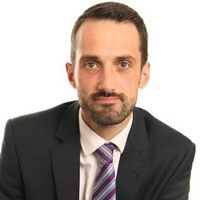 Some of his former colleagues have sent in their tributes to him, and it is my sad privilege to post them below.

"We mourn the loss of Stephen, a much respected colleague and a much loved friend to so many at the firm. Stephen was someone who exuded calm professionalism and who provide sound counsel to Clyde & Co’s leadership in his time with us. He understood the firm and what makes it tick and was able to combine that with his incredible knowledge of the legal sector, not to mention his  sharp intellect, to provide advice that was invariably sensible, measured and in the best interests of the firm.

A clear headed and focused communicator he was also known for his dry wit and humour which endeared him to people he met as he travelled across the Clyde & Co network. His team and peers respected him greatly and he has left a strong legacy at the firm, having helped us during a period of fast growth and change. We are thankful for everything he did.

Stephen will be much missed. We send our sincerest condolences to all his family and friends at this most difficult of times, especially his wife and three boys, to whom he was so devoted."

"Stephen was a wonderful person to work for and someone who left an indelible mark on Clyde & Co and those who worked with him.  He was kind, fair and very, very funny. No matter what the situation, he was always able to crack a joke (not always a good one, but quite often so) that would defuse any tension and help put work into context. Despite the fun he was also someone who set high standards and pushed everyone who worked for him to achieve to their highest potential. He was also a great teacher and coach and the things he didn’t know about the legal profession probably weren’t worth knowing in the first place.

That most people who worked closely with Stephen thought of him as a good friend as well as a colleague was the best reflection on the man that he was. Kindness and integrity ran through him like a stick of rock. He would take time to get to know people and chat, without giving any sense that there might be other pressures on his time. Outside of work he was a devoted Christian and family man who would talk often and warmly about his wife and boys, whom he utterly adored. My thoughts, love and prayers are with them at what is an incredibly difficult time for them all. Stephen will be hugely missed but he will be very fondly remembered by so many people across the profession."

“Stephen was, first and foremost, a thoroughly good human being.  He combined integrity, strong personal beliefs and a sense of purpose in everything that he did. Of course, his priority was always his family, but whilst with Clyde & Co, he made an immediate and lasting contribution. He joined in 2015 during a period of ongoing rapid growth for the business and when clear and effective internal and external communication was at a premium. He took little time in grasping the essence of the business and using his significant acumen to give it shape, identity and drive - in the legal services market place, across the expanding firm itself and by engaging artfully with the media. This vision for the firm is not his only legacy. He also developed a sophisticated global communications team, which continues to serve the firm admirably and in a way that I know he was proud of. Stephen always played the ball, not the man and was the person you would want by your side as a loyal and courageous friend and colleague”

"Stephen joined the firm around the same time that I joined the Management Board and I liked him as soon as I met him thanks to his thorough decency and easy manner. It was very clear that he cared deeply about doing his best for the firm, something which endeared him to many and energised his team.  It was hard not to enjoy spending time with Stephen thanks to his knowledge of a wide range of subjects, his intellect, and his ability to tell a great story. He was a gentle and unassuming man but had a presence that made people listen.  It is so sad to lose a colleague so young. The messages we have received since his passing show that he meant a lot to many people across our firm. We send our love, sympathy and support to Stephen’s family as they mourn his loss."

I grew up with Stephen in Lancashire and knew him and his family for many years. Absolutely heartbreaking for them all. He was a thoroughly decent bloke, Ive never heard anyone say anything even approaching a negative comment about him. Such sad news