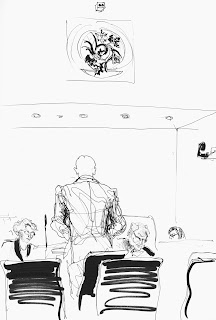 'I'm sufficiently old to be able to remember something of the contemporaneous events,' says Lord Kerr, who is presiding over R v Adams. To the girl who briefly sits beside me, flicking through WhatsApp, it's ancient history.

I remember the British confusion when the IRA bombing campaign reached the mainland in 1973. Metropolitan litter bins disappeared. Public lavatories at railway termini were briefly closed. It was said that the Bakerloo line would never be bombed as it serves the Irish community in Kilburn. I was told about a girl with an Irish accent carrying her brother's birthday cake on the Tube: the police cut the cake into little pieces to prove that it didn't contain explosives. Did that happen? There were more sophisticated ways of dealing with suspect devices but it was plausible at the time. 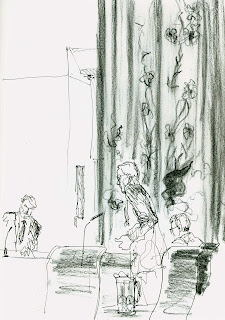 Lord Burnett, the Lord Chief Justice, has joined the Supreme Court bench today. Gerry Adams is absent. The court is tumbleweed alternating with tour parties who come and go with a swish of Gore-Tex on the wood and leather seats. The air conditioning is barely audible; the bagpiping busker outside can't be heard thanks to triple glazing. Now and then the Welsh slate clock on the wall makes its sinister rasp; disappointing too was the harsh, dissonant voice of Gerry Adams once the British were allowed to hear it, instead of the silver-toned actors who dubbed him from 1988-1994, when a broadcast ban applied to Irish dissident groups.

Professor Alan Paterson, author of Final Judgment, about the early years of the Supreme Court, slips in towards the end of the appeal. 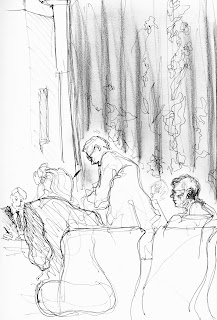 At one point Lord Kerr, who was previously the Lord Chief Justice of Northern Ireland, appears to be attending to a paper cut on his finger. This is not the time or place to hold a silence for the adults and children killed because of the Troubles but a tiny drop of blood shows up as a pathetic fallacy.

Gerry Adams is trying to clean up his criminal record. In 1975 he was convicted twice for attempting to escape from the Maze prison where he was interned without charge or trial. But government papers released under the 30-year rule showed that his interim custody order, made by the Minister of State under the Detention of Terrorists (Northern Ireland) Order 1972 art. 4(1), had not been considered by the Secretary of State for Northern Ireland, who was then Willie Whitelaw. Does this make the order invalid?

Counsel makes a reference to 'groping at perpetual twilight' and when the Supreme Court puts the recorded film on its website I will be able to check the context but meanwhile I am left with Isaiah 59:10: We grope for the wall like the blind, and we grope as if we had no eyes: we stumble at noon day as in the night; we are in desolate places as dead men. 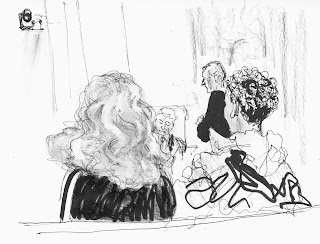 After the hearing I encounter a real live hunger strike on Victoria Street, far in distance and time from the ten Provisional IRA hunger strikers who died in the Maze in 1981: beyond House of Fraser's twinkly Christmas display, Extinction Rebellion campaigners are lodged outside Labour Party HQ.

Further up and down this street which connects a Protestant abbey and a Catholic cathedral, rough sleepers are muffled against the cold or insensible to it. A woman handing out leaflets says, 'Give your lives to Jesus, people.' 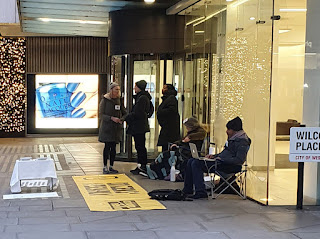 Coda: the British have a long and painful tradition of indifference to/ignorance of Ireland. I am beyond sickened by those who would trash the Good Friday Agreement for the sake of pitiful delusions about Brexit. It has been keeping a fragile peace, more or less, since 1998. 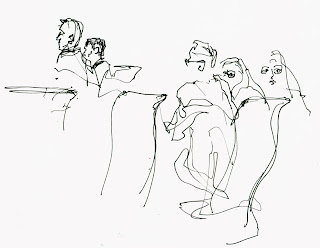 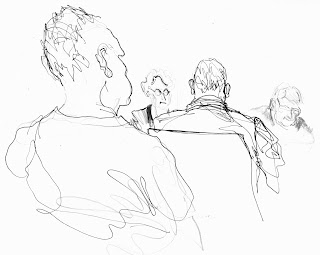 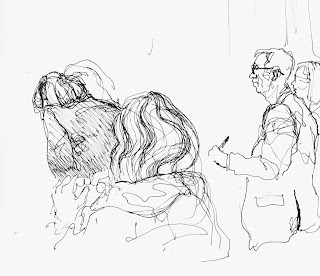 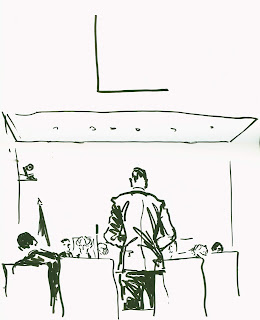 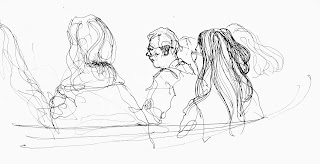